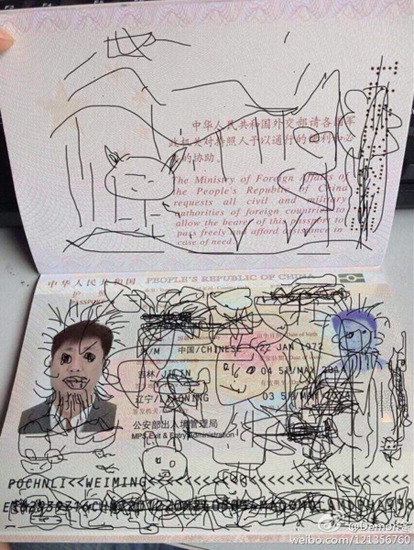 Posted at 13:27h in Blog, Global Adventure by GlobalUK
Share

A Chinese dad found himself stranded in Korea after his son decided to use his passport as a sketch book. The tourist known as Mr Zhang had travelled with his son to Korea, on a trip organised by the local hospital. It was only on leaving that he discovered that his passport was looking a little different, with the pages now covered in plants, animals, clouds and other scribblings. His son had also given him a makeover, adding a moustache and beard to the passport photo.

Korean immigration officials took exception to the artwork on Mr Zhang’s passport and barred him from leaving the country. Mr Zhang took to Weibo, a Chinese microblogging website, to vent his frustration and concern with a picture of the passport, writing,  “It’s so depressing. What am I supposed to do now I cannot go back to China? Solutions? Help???”

This happened back on May 15th, and it is unknown whether the man managed to get emergency travel documents from the Chinese embassy to return home. There is also some doubt around the authenticity of the story, particularly as the man is anonymous and some social media users have suggested that the passport may have been photoshopped. Let us know what you think in the comments below.