06 Mar Interview: Keeping Your Chin Up with Jimmy’s Iced Coffee

Darren: How do you maintain that kind of ‘Keep your chin up’ vibe?

Suzie: I think because Jim and I are expats – we lived overseas for 18 years – we’ve got, very much, a sunshine in our belly feeling, and are very kind of, “Oh, it’ll be alright. Just keep going,” thing. Which I know has definitely helped to drive the business, because we don’t look over our shoulders. We do, and we have, worried, obviously, because we borrowed money from our parents, and almost left them dry, because we couldn’t get any money from the bank or anything.

Our culture is very laid back, but we’ve never had any money. So, therefore, we’ve had to make the best of everything that we have. Therefore, when you don’t have any money, and you don’t have budgets to buy stuff, you have to be creative.

We are so anti-corporate. In our previous roles, we’ve had to fall into corporate and do various jobs, like I was in the police. I look back at it, and it’s just like, “No wonder it didn’t work, because I just don’t fit with that.”

Although we’re growing and we are a company now, we’re not just two siblings, running round in a £500 little car. We’ve maintained that culture by having an office layout the way we have, by having a pizza oven, by having a guy come in and cook for us once a week; we don’t have a dress code. Making it a place where we want to work.

We’ve got ten coffee commandments up there, and they are very much driven by Jim. He’s Captain Positive, Captain Optimist all the time. Not that we’re not in here, but everyone’s got their roles, and they do their thing.

No-one’s taking the mick; everyone’s throwing in the hours; everyone’s producing what they need to produce. That means that the office can just flow, and then, naturally, everyone just feels pumped all the time.

We’re like a big team, so we don’t have hierarchy. We basically say, “What is here is ours.” So we’ve got a load of cars and vehicles, and whatever. So let’s say, if somebody’s car is in for an MOT, or it’s not working, it’s just like, “Well, there’s the key cupboard. Go and help yourself.”

But when we have people come in, they’re just like, “Really? Is that okay? What, we get lunch provided every day? We get breakfast provided every day?” “Yes.” It’s quite hard for people to get their head round it. I don’t know where they will have come from, but I know that what we do offer is quite a unique offering in here, but it’s what Jim and I would want ourselves.

I’m not going to create something where I don’t want to come to work. So I’m afraid, if it’s going to have that free-flowing easiness, then they’ve got to get on with that attitude.

Darren: How did Jimmy’s become a lifestyle brand?

Suzie: We didn’t know we were making a lifestyle brand. We didn’t know that we’d start making T-shirts and beach towels and rapper caps and rugby balls; it morphed into that. The difference is that a 17- or 18-year-old kid isn’t going to wear an Innocent T-shirt, because it’s not cool. I’m not saying Innocent isn’t cool; it’s a fantastic brand, but it’s not a lifestyle brand, in that respect. But people will wear a Jimmy’s T-shirt. It’s like people will wear a Jack Daniels T-shirt, because it’s a cool brand.

We were recently featured in the Cool Brands book, which was a real compliment. If you actually look at our design, it’s a very simple design. I think just through the sheer personality of Jim’s tone coming through it. If you want to join our journey, hop on. If you don’t, no drama. And we’ve just maintained that voice, because that’s his voice, at the end of the day. He’s not trying to be somebody else.

Suzie: People can spot it a mile off. DFS adverts, or the furniture adverts, they’re like, “Hurry, while stocks last.” That just makes our toes curl. No one watches that anymore. The consumer has changed. You can’t con them or fool them, or anything, anymore. Not that we would want to do. We’ve had a massive corporate say to us, “If we had £10m-” which they do have, “we still couldn’t build what you’ve done, because no-one owns it and so the passion isn’t there. You can build a brand on nothing. We are one of the biggest drinks companies in the world, and we couldn’t do what you’ve done.”

Darren: I know it’s an old saying – just keeping it real, in a sense.

Suzie: Exactly. Keep it simple, and keep it real. Keep your ingredients real. Keep them low. You don’t need to put a load of crap in it.

We couldn’t have done it without social media, because it’s free. Facebook was a lot easier to use, for us, in the earlier days. Whereas now, people say to me, “Your activity is so low on Facebook.” It’s just because you have to pay to promote absolutely everything.

In the early days, we could just go, literally, ‘We’re making this. Hop on. Let’s go.’ It was great. It was like a running commentary. But then it just got so much more technical. And there are all the other forms of social media, and they have played a massive leg-up.

Darren: Well, you’ve got quite a large audience on Facebook. There are about 350,000 people, or something, following your pages.

Suzie: Is that what it is? I don’t know.

Darren: So, as you say, when you start looking at doing targeted sales stuff, there are some big figures to start leveraging it. Instead of it being a grass roots kind of campaign, it’s suddenly big. But then, the downside of that is that Facebook knows that you’ve got that audience.

Darren: They want to charge you for every person on that. Ironically, they’re almost forcing you to be even more creative, again, and taking away the channel that you use to make your business. 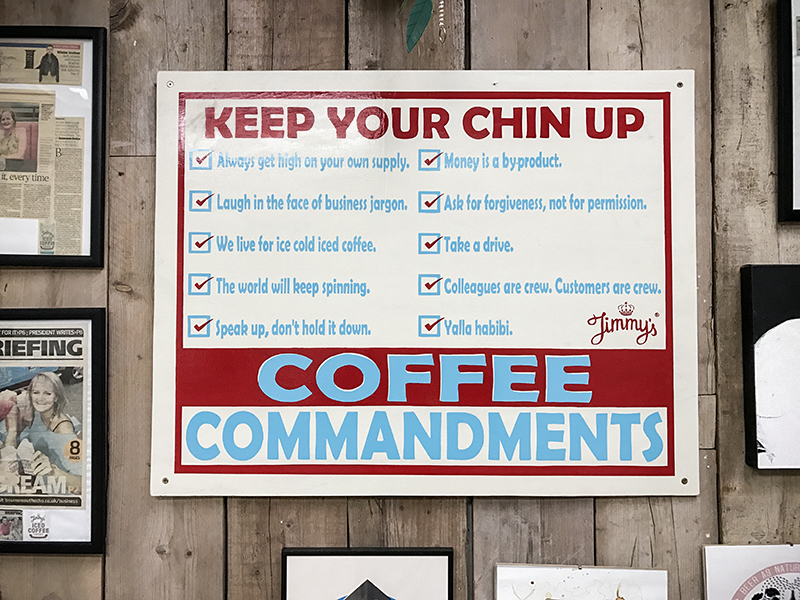 Darren: Do you think that from a brand communication point of view, you need to be much more considered with the way and when you communicate, and make it more concise?

Darren: How are you going to maintain that kind of vision with an upscaling in the team?

Suzie: That’s probably one for Jimmy…

Jimmy: Yes. It’s just a case of being able to still have the freedom to be silly, I think, is fundamentally the first thing. And building a good enough team around you, so that you can still be able to do the fun stuff that you’ve always wanted to do. If you have fun at the beginning, and then, suddenly, you’re just locked in an office, on a computer all day, then you realise that you’ve done it for the wrong reasons.

You still need to be able to do the stuff that makes your heart sing, I think, which is just fundamentally important. It’s what everyone else wants to see, as well. Because they’ve seen it in the beginning, and that’s what people enjoy seeing, so they want to see it carrying on. They don’t want to be blinded by some other kind of corporate toffee stuff that people just aren’t really interested in, because they’re faced with it, on a daily basis, by everyone else.

Darren: Do you feel like there’s an expectation now to do the same sort of thing? That it has almost become its own thing that you’ve got to follow on from?

Darren: I’m seeing Jimmy’s Jazz Club. That’s what I’m seeing, mate. I want to see you on a flute.

Jimmy: A lot of people also just really enjoy the videos that we make.
Suzie: Instead of you dancing in front of the ice cream van and stuff like that.

Darren: That was where it started, wasn’t it? That was it.

Jimmy: Yes, just stuff like that. So just to be able to, basically, pick something that we do that’s incredibly lo-fi, but still have the budget to be able to seed it out and show it to people is really important. So I don’t think we’re going to go for such a high-end production this year.

We’re organising a ride club rally on 13th May, and the production costs for that are going to be fairly extortionate. So that’s going to be going more into that than producing a high-end production video. We can actually get some really great content out of the rally. So cars, bikes, skateboards, and everything, are going to be meeting here on the 13th, and getting stickered up, depending on what vehicle you ride, and then go.

Head to the Jimmy’s Iced Coffee website for more information about their delicious range of coffees and to see what else they’re up to.

If you enjoyed this blog post, why not request a copy of our latest edition of InBrief People & Branding, which features latest news, trends and insights into internal communications. Click the button below to order your copy now.